Alejandro Fernandez, Banda MS, Gerardo Ortiz and Christian Nodal to headline the exclusive live audio stream performance series across some of SBS’s top-ranked stations and LaMusica app throughout the month of June 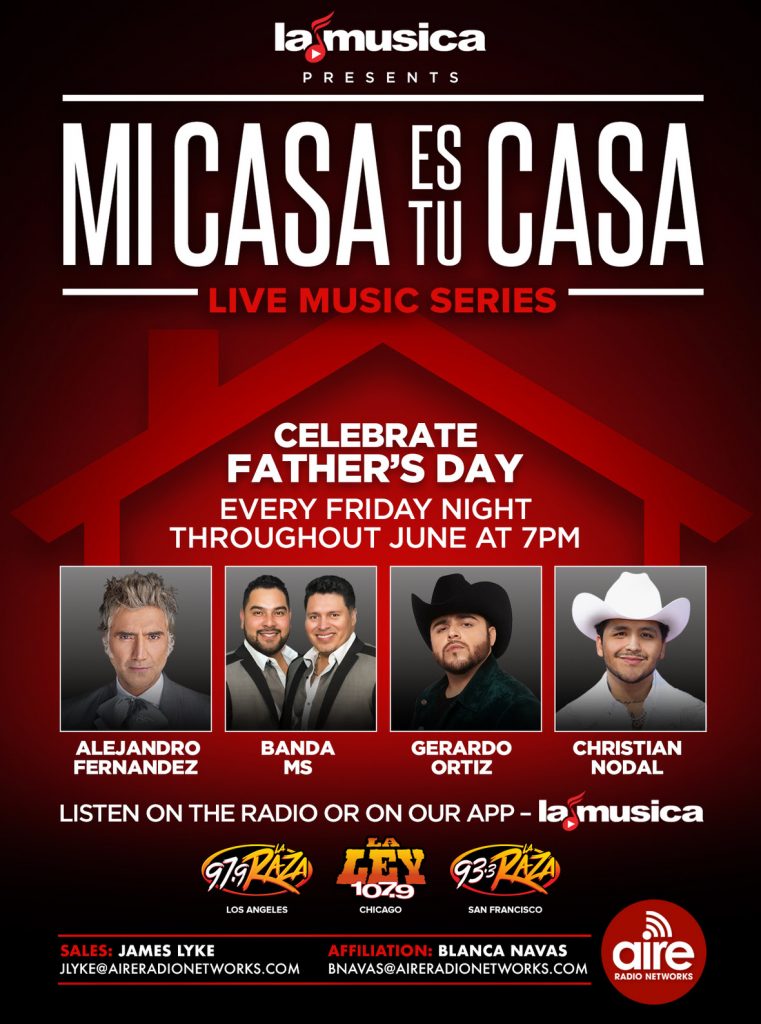 “Celebrations have become especially meaningful and have played a significant role in keeping us virtually connected throughout the coronavirus pandemic,” said Alessandra Alarcón. “We’re thrilled to be working with some of the biggest names in Latin music to celebrate fathers, our heroes at home, on the frontlines and in communities across the nation, through their love and passion for music.”

The Mi Casa Es Tu Casa Live Music Series was created with the goal to entertain and support the Hispanic community, who has been disproportionately affected by COVID-19, with the live audio stream performance and motivational messages by some of the biggest artists who represent all genres of Latin music. The widely popular series premiered on April 24 with performances by Pitbull and Calibre 50, respectively, and has continued every week with artists such as Maluma, Banda Carnaval, Reik, Natti Natasha and many more. Thousands of fans across the U.S. have been tuning in since its inception via SBS’s leading terrestrial stations and LaMusica app.

“This series is very special to my sister, brother and me because we share an extremely close bond with our father and chairman of SBS, Raul Alarcón,” continued Alessandra. “From our house to yours, we encourage the Hispanic community to join us as we tune in to each performance in June. It will be memorable and full of surprises for dads and the whole family.”

All concerts will take place at 7 p.m. ET/CDT/PT and will also be streamed on the LaMusica App

Jc Olivera is the founder and Editor-in-Chief of The Showbiz Live!, An online magazine focused in entertainment news, he is also a contributor photographer for mayor photo agencies, graphic designer, tech and gadget enthusiast. // who happens to love coffee //
Related ItemsEntertainmentMusicNewsSBS Entertainment
← Previous Story Hollywood//TCL Chinese Theatre Turns 93; closed for first time in almost a century
Next Story → “One World, One Prayer” Feat: Farruko, Shaggy, Skip Marley and Cedella Marley