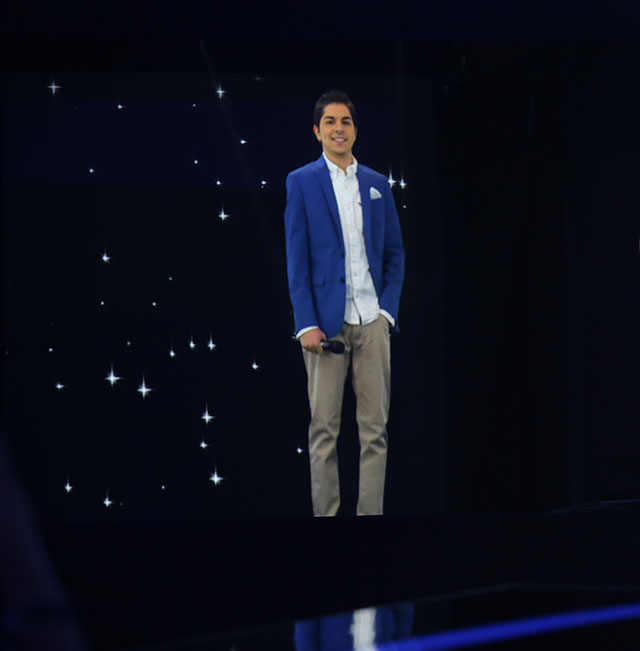 ** THE SHOWBIZ LIVE! – December 3, 2015: Univision Communications Inc. (UCI), the leading media company serving Hispanic America, together with Verizon and Hologram USA, will give one La Banda superfan the experience of a lifetime when they join the show via hologram as the “4th Judge.” Jorge Sanchez, a 22 year-old resident of Los Angeles, will be beamed onto the stage to share his feedback with contestants during the Univision Network’s hit music reality show’s semifinal episode airing LIVE coast-to-coast on Sunday, December 6 at 8 p.m. EST/7 p.m. CT/5 p.m. PT with a re-airing at 8 p.m. PT.

Appearing as the “4th Judge” via hologram is the grand prize of a contest facilitated through the Univision Conecta app, which allows users to accumulate points by interacting and consuming content throughout the La Banda season. The experience was devised by Univision, Verizon (the official voting partner and presenting sponsor of Univision Conecta), and Hologram USA to reward meaningful app engagement for an audience that is highly mobile (70% of Univision’s audience are mobile first with their content), digital-savvy and enjoys live-viewing (91% of Univision’s audience watches TV content live). “Today’s viewer expects more from reality shows. They are mobile, very active on social media and want to be part of the action,” said Cisco Suarez, senior vice president and executive producer, Special Events, UCI. “By engaging La Banda fans through the Univision Conecta app, with a chance to become a judge on their favorite show and exclusive content, we hope to break new ground by bringing stars and fans together with technology.”
“We wanted to bring a unique experience to our Hispanic consumers who are mobile first,” said Javier Farfan,

Vice President of Segment Marketing for Verizon. “The hologram experience is stuff you see in the futuristic movies, and Verizon is bringing you the future now.”
Viewers have been accumulating points by participating along with the show on the Univision Conecta app. On November 23rd, Jorge Sanchez, the fan with the most points, was awarded with this fan-focused hologram experience that will allow him to share his opinions live with contestants on stage. Sanchez will join Ricky Martin, Laura Pausini and Alejandro Sanz on stage in Miami from KMEX Univision 34 in Los Angeles using the power of telepresence via Hologram USA’s patented technology. Additionally, Verizon plans to fly the “4th Judge” and a guest to Miami to attend the La Banda finale.

“Hologram USA has brought legendary artists back to life for new audiences and we’ve beamed politicians and TV stars around the world,” said Hologram USA CEO Alki David. “But it’s a distinct pleasure to work with La Banda and Univision on this historic moment in television: the first use of this revolutionary technology on a music-based reality show and its first use as a once-in-a-lifetime fan reward. We will truly bring holograms to Hologram USA holds the North America patent for the technology that will be featured on La Banda. The company recently made news with announcements of hologram shows for Whitney Houston, Andy Kaufman, Redd Foxx, Billie Holiday, and many others.

Developed by UCI, in partnership with Simon Cowell’s SYCO Entertainment and Haim Saban’s Saban Brands, and co-produced with FremantleMedia Latin America, La Banda is searching for the ultimate Latino boyband.