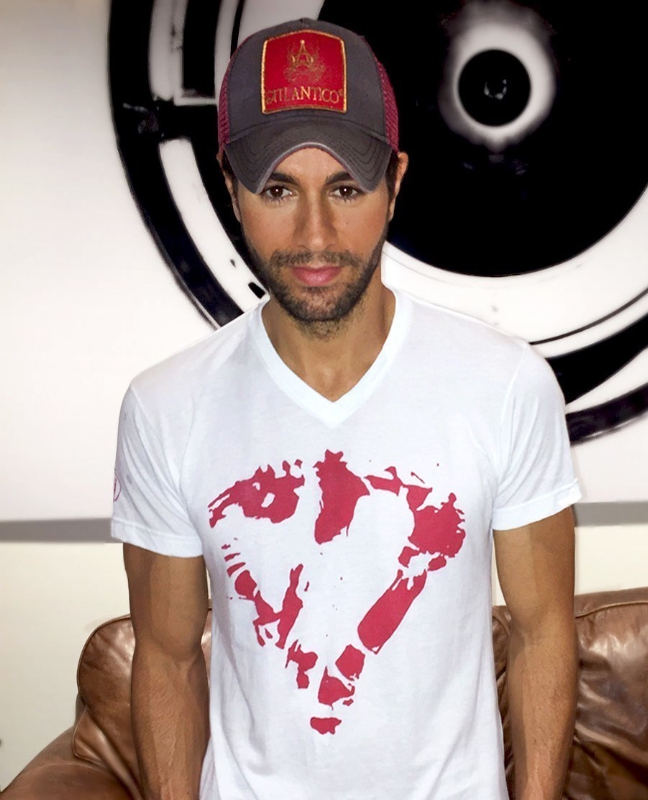 Enrique Iglesias sporting his new “heart” T-shirt. All net proceeds from sales of the T-shirt will go to help kids in times of crises. Photo by Al Silfen (PRNewsFoto/Save the Children)

** THE SHOWBIZ LIVE! – FAIRFIELD, Conn., Oct. 27, 2015 — Grammy Award-winning artist Enrique Iglesias has teamed up with Save the Children to launch a T-shirt promotion today to raise funds to help kids in crises.  A new “heart” T-shirt will be available for purchase online at www.enriqueiglesias.com and at select concert venues.  The design of the T-shirt is inspired by the heart that Enrique drew on his bloodstained T-shirt after injuring his hand on a drone during his concert in Tijuana, Mexico this past May.

“I’m extremely excited to partner with Save the Children to help kids who need it the most.  My heart goes out to the kids around the world who have lived through a humanitarian crisis and have to rebuild their lives from scratch,” said Enrique Iglesias. “As Save the Children knows from experience, recovering from the turmoil and loss caused by war or disaster can take years.”

All net proceeds from the purchase of the “heart” T-shirt, or $12, will go to support the non-profit’s Children’s Emergency Fund, which allows Save the Children to pre-position lifesaving supplies before an emergency hits, respond immediately to a crisis and do whatever it takes to protect the lives of children and create a sense of normalcy.

“Enrique chose to turn his recent hand injury into an opportunity to help children wounded physically and emotionally by humanitarian crises,” said Carlos Carrazana, COO for Save the Children. “These children’s lives are in turmoil. Many have lost loved ones, their homes and their schools.  Some have been separated from their parents and they don’t feel safe. These children are at risk of losing their childhood.”

“We are extremely grateful to have the support of such an influential and talented global artist like Enrique Iglesias,” added Carrazana. “The funds raised from the T-shirt sales will allow Save the Children to quickly respond when kids need us, ensure children’s unique needs are met and that they can go on being kids.”

Save the Children is providing lifesaving relief to children and families affected by 50 humanitarian emergencies worldwide, including the Nepal earthquake, the conflict in Syria and the migrant crisis in Europe. Last year, the agency responded to 103 humanitarian crises, including conflicts, disease outbreaks, floods and cyclones, directly reaching nearly 5 million children through its humanitarian response work.

“My fans are incredible and have big hearts filled with love. I know that together, Save the Children, my fans and I will do a great job of sharing these very special shirts with the world to help provide lifesaving emergency relief to kids. We have to take care of those who need us most—children, especially those facing crises around the world,” said Iglesias.

Save the Children gives children in the United States and around the world a healthy start, the opportunity to learn and protection from harm. We invest in childhood — every day, in times of crisis and for our future. Follow us on Twitter and Facebook.

ENRIQUE IGLESIAS remains one of the globe’s most recognizable and revered superstars. This Grammy Award-winning icon recently released his tenth full-length album, SEX AND LOVE. To date, he has sold over 100 million albums worldwide, cementing him as one of the best-selling Spanish artists of all-time. Other accolades include five Top 5 singles on the Billboard Hot 100, with two number ones, and 13 number ones on the BillboardDance chart—which is “the most for any male artist in the chart’s history” and more than Michael Jackson and Prince. His total number ones throughout Billboard‘s charts exceed 71, and he also is the record-holder for “Most #1 Spanish Language Singles” on the Hot Latin Track Charts. His song, “Bailando,” recently set a record for the longest #1 in history on Billboard‘s Hot Latin Songs chart at 42 weeks, and the music video has gained over 1 BILLION views on YouTube.