Burbank, CA (November 3, 2014) – Emmy Award-winning comedian, host, and actor Rosie O’Donnell will return to guest star in more episodes of ABC Family’s hit drama series “The Fosters.” O’Donnell’s character, Rita Henricks, a tough yet compassionate foster care group home caregiver, was introduced in the first season of the critically-acclaimed series. She will appear in two episodes to air in early 2015.

Currently in its second season, “The Fosters” is a compelling, one-hour drama about a multi-ethnic family mix of foster and biological kids being raised by two moms. Stef Adams Foster, a dedicated police officer, and her wife, Lena Adams Foster, a school Vice Principal, have built a close-knit, loving family with Stef’s biological son from a previous marriage, Brandon, and their adopted twins, Mariana and Jesus. Recently added to the mix is their newly adopted son, Jude, and his sister, Callie, who is striving toward adoption as well despite the roadblocks caused by her tumultuous family history. 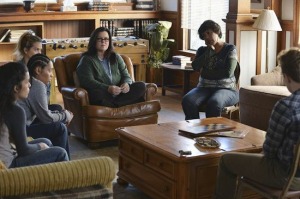 Part of the Disney/ABC Television Group, ABC Family is distributed in over 97 million homes. ABC Family features programming reflecting today’s families, entertaining and connecting with adults through relatable programming about today’s relationships – told with a mix of diversity, passion, humor and heart. ABC Family’s programming is a combination of network-defining original series and original movies, quality acquired series and blockbuster theatricals. For 2014, ABC Family has launched the “WATCH ABC Family” authenticated service which allows viewers with participating TV subscription services access to 24/7 live viewing of the network, as well as continued on demand access to such popular series at home and on the go via a wide array of devices. ABC Family is also the destination for annual Holiday events with “13 Nights of Halloween” and “25 Days of Christmas.” ABC Family. A New Kind of Family.