ABC CELEBRATES ALL THINGS SCARY, SPOOKY AND FUNNY THIS HALLOWEEN

ABC CELEBRATES ALL THINGS SCARY, SPOOKY AND FUNNY THIS HALLOWEEN 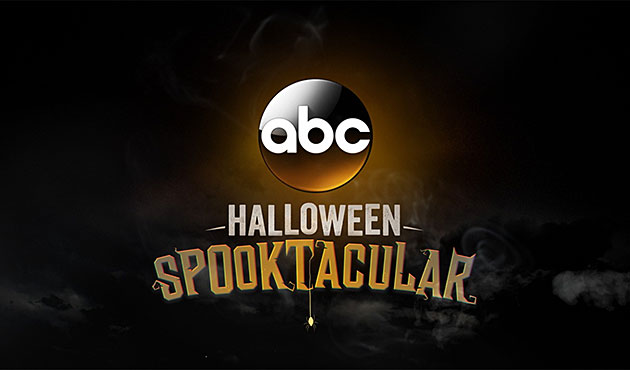 ABC celebrates the scariest night of the year with Halloween-themed programming, kicking off on WEDNESDAY, OCTOBER 15. Highlights include the beloved animated special, “It’s The Great Pumpkin, Charlie Brown,” ghoulishly good times with “The Chew,” the return of fan favorite special, “The Great Halloween Fright Fight,” a Wednesday night family comedy block of tricks, treats and laughter with “The Middle,” “The Goldbergs,” “Modern Family” and new comedy series “black-ish,” along with an all-new “Cristela.”

TOY STORY OF TERROR – Fast becoming a Halloween tradition, last year’s hit special, Disney•Pixar’s “Toy Story OF TERROR!,” a spooky new tale featuring all of your favorite characters from the “Toy Story” films, airs WEDNESDAY, OCTOBER 15 (8:00-8:30 p.m., ET). What starts out as a fun road trip for the “Toy Story” gang takes an unexpected turn for the worse when the trip detours to a roadside motel. After one of the toys goes missing, the others find themselves caught up in a mysterious sequence of events that must be solved before they all suffer the same fate in this “Toy Story OF TERROR!” Tom Hanks and Tim Allen Reprise their roles as Woody and Buzz.

THE CHEW – It’s a ghoulishly good time at ABC’s “The Chew” when co-hosts Mario Batali, Michael Symon, Carla Hall and Clinton Kelly celebrate Halloween. Beginning MONDAY, OCTOBER 20 (1:00 p.m.-2:00 p.m., ET), Clinton Kelly leads a weeklong series, “Your Freaky Front Door,” with easy, innovative and inexpensive decorating ideas to keep your front door looking freakishly fantastic for all the trick-or-treaters this Halloween season. MONDAY, OCTOBER 27-31 features Halloween-themed segments, including Carla Hall and Clinton Kelly’s Haunted House experience, a visit to DeBrito Chocolate Factory in California and their gourmet caramel apples, and the Secret Jack-O-Lantern is passed around where the hosts will secretly assign each other the costumes they will wear on Halloween, FRIDAY, OCTOBER 31.

AMERICA’S FUNNIEST HOME VIDEOS – “2504” –This week’s special Halloween themed episode highlights include animals dressed in funny costumes like a goat dressed as a cheerleader and a dog dressed as a fish, hilarious reactions from people being told they are going to be grandparents, two little girls who are frightened when seeing cotton candy for the first time, and Tom playing “What’s Behind the Scary Ghost?,” on “America’s Funniest Home Videos,” SUNDAY, OCTOBER 19 (7:00-8:00 p.m., ET).

FOREVER – “The Frustrating Thing About Psychopaths” – When a human heart is delivered fresh out of a body to the homicide division, Henry and Jo end up in the middle of a Jack the Ripper copycat murder investigation. But it doesn’t stop there. A second killing resembles another infamous, unsolved crime: the Black Dahlia murder. Henry has seen it all before, as flashbacks show his involvement with the two original cases from two very different periods of his long life. However, Henry’s anonymous caller tips him to search beyond the clues of these classic killings and leads the police squad to profile a very different, yet disturbed suspect,” TUESDAY, OCTOBER 21 (10:00-11:00 p.m., ET).

LAST MAN STANDING – “School Merger” – Mike and Chuck debate the merits of a local ballot measure merging their upscale neighborhood high school with one in the inner city. For Halloween, Ryan dresses up Boyd as a lump of coal – another reminder to Vanessa how her job as a geologist may be hurting the environment, FRIDAY, OCTOBER 24 (8:00-8:31 p.m., ET).

DANCING WITH THE STARS – “Dancing With the Stars” will treat viewers to an exciting Halloween-themed episode filled with thrilling performances from the remaining eight couples. Each pair will light up the ballroom floor with spectacular costumes vying for a wickedly perfect score, on MONDAY, OCTOBER 27 (8:00-10:01 p.m., ET).

GENERAL HOSPITAL – The kids in Port Charles celebrate Beggars Night (which is a regional holiday that falls on Halloween Eve), airing TUESDAY, OCTOBER 28.  Franco and Carly are planning on getting married on FRIDAY, OCTOBER 31, but what tricks does Franco have up his sleeve?

THE GREAT HALLOWEEN FRIGHT FIGHT – From the producers of last year’s holiday hit “The Great Christmas Light Fight,” a one-hour special — “The Great Halloween Fright Fight” — premieres TUESDAY, OCTOBER 28 (8:00-9:00 p.m., ET). The new special will feature a number of families competing for the greatest haunted Halloween displays and a $50,000 prize. For the Halloween special, the families were chosen through an extensive nationwide search, based on their previous elaborate Halloween displays, incredible set decorations and over-the-top designs.  “The Great Halloween Fright Fight” comes from FremantleMedia North America (“American Idol,” “America’s Got Talent,” “The Price is Right”). Brady Connell, Max Swedlow, Thom Beers and Jennifer Mullin are the Executive Producers.  Michael Moloney and Sabrina Soto are the judges.

THE MIDDLE – “Halloween V” – It’s Halloween night, and Frankie and Mike are stunned – and a bit scared — to learn that Brick has invited a girl over to the house just to hang with him. Meanwhile, to help supplement her college fund, Sue attempts to put together a pumpkin patch screening of the animated classic, “It’s the Great Pumpkin, Charlie Brown,” and Axl reluctantly goes to the library to write a history paper and ironically gets locked inside after staying past closing hours, WEDNESDAY, OCTOBER 29 (8:00-8:30 p.m., ET).

THE GOLDBERGS – “Family Takes Care of Beverly” — When Pops accidentally starts a fire in his apartment during a Halloween party, he’s evicted and Beverly invites him to move into the Goldbergs’ home. Pops’ wild lifestyle is soon too much for the family to handle and they decide to look into other options. Meanwhile, Barry stops Erica from eating Pop Rocks candy with soda, since according to urban legend, the combination would kill her.  Since he “saves” her, Barry wants something in return from Erica, WEDNESDAY, OCTOBER 29 (8:30-9:00 p.m., ET).

MODERN FAMILY – “Halloween 3: AwesomeLand” – Even though Halloween is Claire’s holiday, she allows Phil to take over this year so instead of her usual fright-fest theme, he decides to turn the house into AwesomeLand! Gloria picks out Princess Fiona and Shrek costumes for her and Jay but Jay decides he wants to be Prince Charming complete with a full head of gorgeous hair, and with the hair comes a new sense of confidence. Elsewhere, Cameron gets overwhelmed by the day’s activities and Mitchell has closing arguments for a huge case, and it doesn’t help that the stenographer is dressed like a spider,WEDNESDAY, OCTOBER 29 (9:00-9:31 p.m., ET). Guest stars Steve Zahn (“Treme”) and Andrea Anders (“Better Off Ted”) return as the Dunphy’s neighbors.

black-ish – “The Prank King” – Dre fears his holiday fun will be ruined when the older kids balk at the glorious Johnson Halloween tradition of seeing who can pull the most outlandish pranks on each other, WEDNESDAY, OCTOBER 29 (9:31-10:00 p.m., ET).

CRISTELA – “Hall-Oates-Ween” – It’s Halloween and Cristela is eager to show Trent her “party-whispering” skills to make this year’s party a success.  After failing to convince Josh, Cristela gets Maddie to join her in dressing up as Hall & Oates. Meanwhile at home, Natalia’s dislike for Halloween has her celebrating the Day of the Dead instead and, ironically, her stories of deceased relatives makes her the most popular Halloween attraction in the neighborhood, on “Cristela,” FRIDAY, OCTOBER 31 (8:31-9:00 p.m., ET), on the ABC Television Network. Gabriel Iglesias (“The Fluffy Movie”) guest stars.

Jc Olivera is the founder and Editor-in-Chief of The Showbiz Live!, An online magazine focused in entertainment news, he is also a contributor photographer for mayor photo agencies, graphic designer, tech and gadget enthusiast. // who happens to love coffee //
Related ItemsABEHalloweenProgrammingTV
← Previous Story Spike Launches Its First Ever TV Everywhere App on September 30
Next Story → Rosie O’Donnell to guest star in additional episodes of “The Fosters”