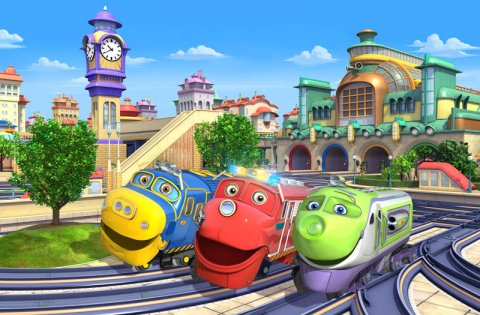 CHUGGINGTON LIVE! The Great Rescue Adventure Kicks Off in January 2015

This brand-new production features impressive trains with working features and movements that bring the Chuggington TV series characters to life on stage. A fun, two act musical, this live show is presented before a giant LED video wall featuring animated locations and background action sequences from the popular TV series.

The tour is currently scheduled to play more than 50 cities throughout North America, including New York,Orlando, Fort Lauderdale, Pittsburgh, Austin, and Detroit. The tour schedule and ticket information can be found at www.chuggingtonlive.com.

In CHUGGINGTON LIVE! The Great Rescue Adventure, the trainees are eager to impress their mentors by mastering new roles that test their courage, speed, and determination. When Koko finds herself in trouble at Rocky Ridge Mine, it’s up to her friends to help her. Do the trainees have what it takes to put their newly learned skills into practice to save Koko?

Life Like Touring, one of the leading providers of live family entertainment, and Ludorum, the global children’s entertainment specialist have partnered for this live-action touring event.

“Chuggington fans will be treated to plenty of adventure and well known songs from the show as well as brand new ones exclusive to CHUGGINGTON LIVE! The show is interactive and we look forward to seeing our audiences participate from their seats and help the trainees on their exciting adventure,” says Ludorum’s Natalie Setton, Head of International Sales.

“Putting together this one-of-a-kind live show has been very exciting and we are confident audiences will have an unforgettable time watching it and joining in!” says Anton Berezin, Producer, Life Like Touring.