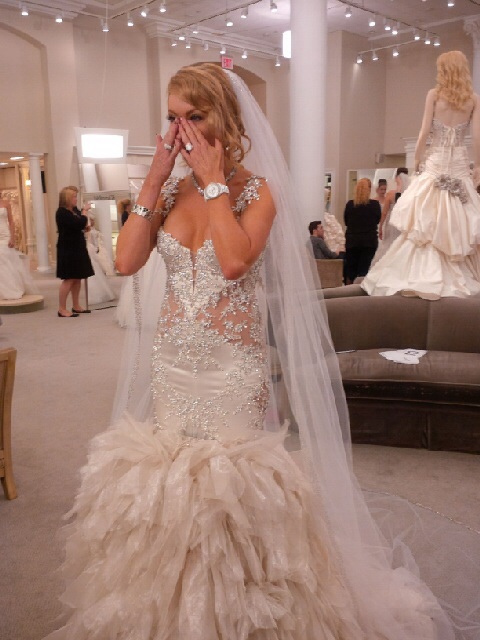 ** THE SHOWBIZ LIVE! – NEW YORK, Nov. 19, 2014 / – SYTTD debuts the big star of Hollywood beyond the Kardashians. Monika Jensen has gotten engaged and will be featured on the New York hit bridal show Say Yes To The Dress, celebrity edition, airing Friday, Dec 5 2014. It is no surprise, contemporary artist Monika Jensen is recognized in the entertainment industry as “The celebrity artist”. Starting her career as a visual artist using oil paint for her medium, her career has exploded also in modeling and acting making her the latest big star in Hollywood.

Her unique artwork has made her brand a household name. Making appearances on the red carpet at the Grammy Awards and also being the exclusive artist at The Oscar Lounge, she is now acting and taking her artwork with her.

One of Monika’s first roles in film was “If You Love Your Children”, since then she has been working on a new hit TV show that will air in 2015. Her famous artwork will be seen throughout the season on set as well as playing a key character role, details TBA.

Her bold personality, talent, popularity in the media and good looks has built her career and Art Empire. It’s no surprise that Monika’s ongoing popularity has a buzz going in the media for the SYTTD episode in season 12.

Commissioned works by Monika Jensen can run in the hundreds of thousands, as she only produced a limited quantity of originals, making her one of the most sought after artists for art collectors.

View her work at http://www.monikajensenproductions.com and see her popularity on Twitter @monikajensen1

Jc Olivera is the founder and Editor-in-Chief of The Showbiz Live!, An online magazine focused in entertainment news, he is also a contributor photographer for mayor photo agencies, graphic designer, tech and gadget enthusiast. // who happens to love coffee //
Related ItemsMonika JensenTVYes to the Dress
← Previous Story Popular Children’s TV Program, Chuggington™, Is On Track for First North American Live Show Tour
Next Story → CBS CELEBRATES THE HOLIDAYS WITH VERY MERRY EPISODES