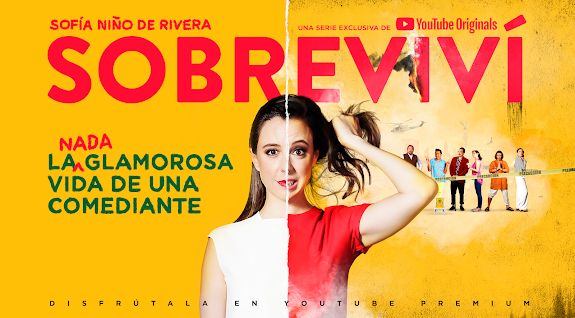 ** THE SHOWBIZ LIVE! – Los Angeles, CA — September 5, 2018 — SOBREVIVÍ, an all-new Spanish language YouTube Originals series starring Sofía Niño de Rivera, follows her character, Sofía, a young stand up comedian in her struggles to survive the day-to-day situations life throws at her alongside her troublesome and quirky group of family and friends.  The 8-episode, half-hour series, coming to YouTube Premium on October 3, 2018, shows us the not so glamorous life of a comedian.

In SOBREVIVÍ, Sofía encounters different obstacles in chaotic Mexico City on her daily search to grow her career and succeed – whether its insecurity, misunderstandings, bureaucracy, bad dates, etc. But Sofía is not the only person to struggle in this story: Xavi (Ricardo Peralta), her best friend, is a failed comedian and waiter at Cafe 23. Chuy (Ricardo Perez) her manager, who is noble and clumsy at the same time, does the best he can to bring Sofía’s career to the big leagues, but has a terrible enemy: his own ignorance.

“SOBREVIVÍ is an incredible project for me because it breaks through so many unspoken barriers — it is the first female-led comedy series produced in Mexico with a mostly female crew,” says Sofía Niño de Rivera.  “I am very proud to be part of this project, of the entire team that helped us do it and to work with YouTube to show the world the potential of a new style of comedy from Mexico.”

“We’re thrilled to be working with Sofía, a trailblazer in comedy in Mexico and someone who is in a league of her own when in comes to her work on and off the stage,” said Susanne Daniels, Global Head of Original Content, YouTube. “We’re beyond excited to partner with Sofía, Raúl and Félix, to help the rest of the world meet Sofía as a talented comedian and producer.”

SOBREVIVÍ starring Sofía Niño de Rivera (Expuesta, Selección Natural, Club de Cuervos) is best known for her hit comedy shows and stand-up routines.  Ricardo Peralta, plays Xavi, and is one of the stars behind YouTube channel, Pepe Y Teo, which aims to portray the contemporary LGBTQ world.  Ricardo Perez, who plays Sofia’s clumsy manager, Chuy, is an up and coming Mexican comedian in Mexico City and will kick-off a national tour.  Ana Gonzalez Bello (Gandalf, El Beso), is an award-winning actress, writer, producer and plays the role of Gaby.  Octavio Hinojosa (La Piloto, La Fiscal de Hierro) plays the role of Diego, Sofia’s older (but intellectually inferior) brother and is an accomplished writer, director, actor and producer and been cast in several TV series and directed short films. Rounding out the cast in the roles of Sofia’s parents are actress and producer, Ariane Pellicer (Man on Fire, The Mexican, Como Dice El Dicho) who has participated in 30 films, 22 telenovelas, and 20 theater plays and renowned actor and director, Xavier Cervantes, who as a director has more than 20 theatrical projects which earned him recognition by the UNESCO International Theater Institute in Mexico.

The official trailer for SOBREVIVÍ will be available on Monday, September 10, 2018 at 12:00pm Central Time on Sofía Niño de Rivera official YouTube channel.