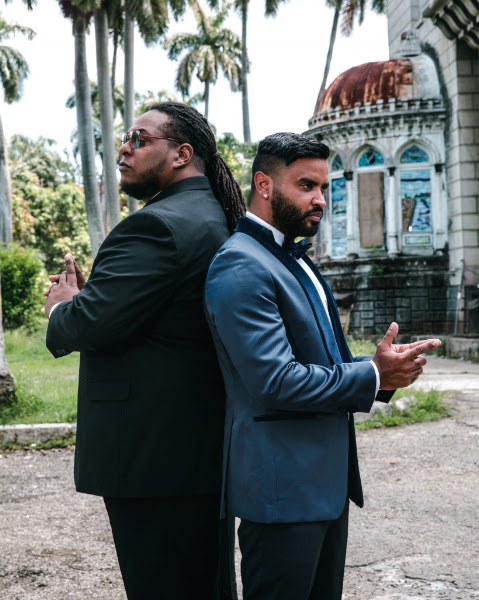 ** THE SHOWBIZ LIVE! – Friday August 31, 2018: Zion & Lennox premiere today the new single and video for “Hola” (Hello). Model and Miss Universe Puerto Rico 2012, Bodine Koehler, stars in the video for “Hola.” Renowned director, Daniel Durán, was tasked with directing the video for “Hola” shot on location in Cuba. The James Bond inspired story for the video depicts Zion & Lennox as secret agents, perhaps the duo’s alter egos Agent Z and Detective Lennox, their mission to rescue Bodine from her kidnappers in this story of high stakes espionage. Both artists showed off their acting skills in the video. The new single “Hola” is available on all digital platforms. LISTEN TO “HOLA”

The anticipation on the release of the new single has continued to grow during the past weeks after the urban duo started teasing “Hola” on social media. Urban artists and celebrities such as J.Balvin, Sebastián Yatra, Anuel, De La Ghetto, Justin Quiles, Tito Trinidad, Marc Anthony, Wisin, Maluma, Prince Royce, among others, joined the fun by creating their own videos saying “Hola.”

The new single “Hola” is the follow up to the smash #1 hit “La Player” (Bandolera). Recently the leading streaming platform in the USA, Pandora®, recognized Zion & Lennox for surpassing one billion streams on the APP and the duo have surpassed the 100 million streams on Global Platform Spotify. They also received on behalf of their record label Warner Music Latina, multiple Gold and Platinum certifications from the USA, Latin America and Spain for their successful album “Motivan2″

Zion & Lennox continue on tour in the USA, Latin America and soon in Europe.

Jc Olivera is the founder and Editor-in-Chief of The Showbiz Live!, An online magazine focused in entertainment news, he is also a contributor photographer for mayor photo agencies, graphic designer, tech and gadget enthusiast. // who happens to love coffee //
Related ItemsLennoxMusicZion
← Previous Story PATY CANTÚ feat. ALEJANDRO SANZ “CUENTA PENDIENTE” debuts as #1 Hot Song in Argentina and Mexico!
Next Story → Eight-Time GRAMMY® Winner Dolly Parton To Be Honored As 2019 MUSICARES® Person Of The Year