With Capture, guests are able to edit their photos by adding freehand drawings, digital props, traditional and vintage photo filters and more. (PRNewsFoto/ShutterBooth)

** THE SHOWBIZ LIVE! – DETROIT, Jan. 16, 2015  — ShutterBooth, the leading provider of photo booth rentals for weddings, corporate functions and other special events, announced today its latest innovation — Capture by ShutterBooth. Capture will take guests’ photos and allow them to easily edit and decorate their photos with new photo filters, digital props and freehand drawings in a variety of colors and brush sizes. 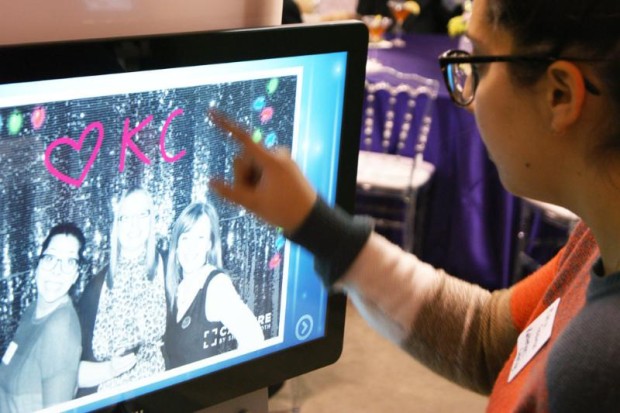 The intuitive software interface allows guests to navigate and edit their photos with ease. (PRNewsFoto/ShutterBooth)

“Capture by ShutterBooth allows guests with just the touch of their finger to turn their photo into a hilarious, unique and candid mementos that can be branded for the event they are attending,” said Nolan Gottschalk, President and CEO of ShutterBooth. “In addition to the customization features, Capture has full green screen functionality built in as well as video, custom print layout capabilities along with in depth guest data collection and reporting features.”

After receiving the print almost immediately once their photos have been customized, guests can upload their photo instantly to Facebook, Twitter and even Email and Text Message the photo to whoever they would like.

“We reimagined the photo booth and the result was Capture by ShutterBooth – a new service that our customers can use that will engage their guests and allow them to unleash their creativity,” Gottschalk added. “With Capture, the magic is at guest’s finger tips with all new touch functionality that will excite clients and create even more memories. And with the social media interface, they can share that memory with their network.”

According to Gottschalk, one of the best aspects of the new Capture program is the intuitive software interface. Guests can effortlessly navigate throughout the software with little to no direction. Capture has been tested at select events and the guest feedback was very positive as they were impressed by how easy it was to use.

Capture by ShutterBooth is the latest addition to ShutterBooth’s wide variety of offerings.  After introducing the traditional ShutterBooth photo booth service 10 years ago, ShutterBooth has been a leading innovator in the photo booth industry by launching a cadre of services including ShutterVideo, Open by ShutterBooth, Green Screen, ShutterGram, ShutterShare, and ShutterYou.

Jc Olivera is the founder and Editor-in-Chief of The Showbiz Live!, An online magazine focused in entertainment news, he is also a contributor photographer for mayor photo agencies, graphic designer, tech and gadget enthusiast. // who happens to love coffee //
Related ItemsFeaturedGadgetsNewsShutterboothTechTechnology
← Previous Story New Battery That Doubles the Life of the Samsung Galaxy Note 4 Announced by Mugen Power
Next Story → Sesame: An Automatic Garage Door Opener That Can Be Accessed with a Smartphone or Smart Keypad