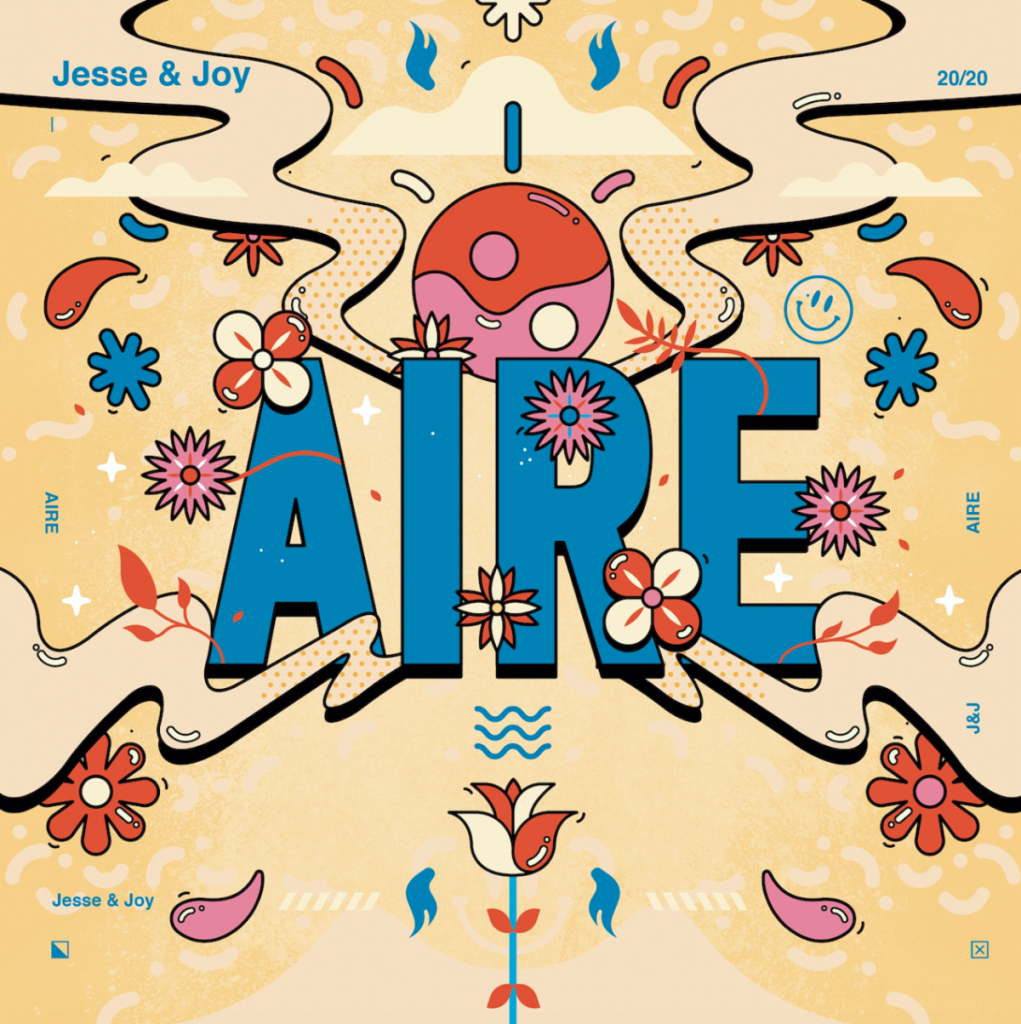 The Grammy – And Six Latin Grammy-Winning Duo Celebrates Their 15th Music Career Aniversary With The Release Of “Aire”. Their Fifth Studio Album, Which Combines Some of the Most Significant Rhythms
in Music History
After the vibrant advance of the singles “Te Espere”, “Mañana Es Too Late”, “Tanto” and “Lo Nuestro Vale Mas”, Today’s Album Release is Accompanied By The NEW Single & Video  “Alguien Mas”
** THE SHOWBIZ LIVE! – The wait is finally over, as Jesse & Joy’s new studio album hits at a time of total renewal for both the duo and the world. It has been precisely this energy that has surrounded this new material by the Huerta siblings, as they prepare to celebrate 15-year groundbreaking career in the music business.
“5 years have passed since the release of ‘Un Besito Mas’, an album packed with emotions and nostalgia, a record that paid tribute to one of the most important people in our lives: our father. It was the same feeling and nostalgia that took us to so many places around the world on a
massive tour, where we gave everything we had to give on every
show, a tour where we could heal ourselves from that loss,
so that we can now step into this new phase of our careers,
celebrate life, and breathe a new AIR (Aire)” Jesse & Joy
All good things take time, just like the flowers that bloom after a storm or the sun that hits our face after we have made it through the rain, and like the Phoenix bird that is reborn from its own ashes to stand up full of color and vitality. That’s exactly what Jesse & Joy’s new album Aire is –a deep breath of pure energy.
For this new journey, both Jesse and Joy wanted to display the happiness they are experiencing in their lives right now, so they allowed themselves to feed on their differences by exposing their individual personalities, and making them converge into one harmonizing vibe. On this album, Jesse & Joy bring some new elements to their world by mixing a wide array of genres ranging from gospel and hip-hop to rock, folk and pop, which turns Aire into a strong dose of joy and coolness –the same they felt when singing and recording these songs. The previously released singles from the album are proof of that: “Te espere”, the first cut from the album; “Mañana es Too Late”, which features J Balvin; “Tanto”, which was joined by Luis Fonsi’s melodic voice; and, more recently, “Lo Nuestro Vale Más”, a song of encouragement, a bet on love and a reflection on who we are and who we want to be.
Just like the Yin and Yang, Jesse & Joy’s duality has been the inspiration for the Grammy winners on this musical journey. Each of the people involved in this puzzle came to them unexpectedly, which ultimately let them to collaborate with friends and co-producers that in spite of speaking a different language were able to breath the same air.
With the release of this album, “Aire”, Jesse & Joy celebrate a 15-year non-stop career, showing appreciation for the good things in their lives. Throughout their successful career, the duo has been recognized by the industry with a Grammy for Best Latin Pop Album for their latest record and 6 Latin Grammys, as well as the “Vision Award” given by the Hispanic Heritage Awards. The siblings have also partnered with different entities such as the United Nations Foundation and UnidosUS and have been able to connect with millions of people, creating a great family around the world.
Aire was produced by Jesse alongside Martin Terefe (Shawn Mendez, Coldplay, James Blunt), Charlie Heat (Madonna and Kanye West) and renowned composer Poo Bear (I Don’t Care –  Ed Sheeran + Justin Bieber, Bad Guy –  Billie Eilish feat.  Justin Bieber).
Aire’s Track list:
1.     Aire
2.     Alguien Mas
3.     Te Espere
4.     Fuego
5.     Mañana es Too Late (featuring J Balvin)
6.     Lo Nuestro Vale Mas
7.     Tanto (featuring Luis Fonsi)
8.     Besame
9.     Valio la Pena
10.  Love (Es Nuestro Idioma)
11.  En que nos Convertimos