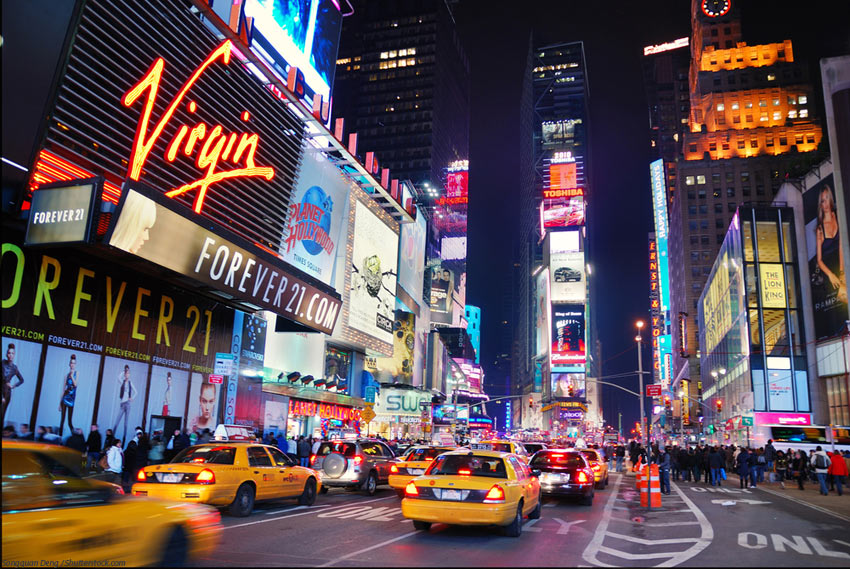 ** THE SHOWBIZ LIVE! – NEW YORK, Dec. 18, 2014 — Times Square Alliance and Countdown Entertainment, co-organizers of New Year’s Eve in Times Square, announced today that revelers across the globe will again be able to experience the excitement of the Times Square New Year’s Eve celebration via a six-hour, live commercial-free webcast. The sixth annual webcast will cover the action and festivities in Times Square, beginning with the Ball Raising at 6 p.m. EST, plus live musical performances, hourly countdowns, behind-the-scenes stories, and star-studded interviews as anticipation builds towards the midnight countdown and the famous Ball Drop. Last year’s worldwide webcast was watched by more than 1.5 million unique viewers representing nearly 200 countries.

The Times Square New Year’s Eve webcast, enabled by Ustream, will feature musical performances by popular rock group O.A.R. who will perform several hit songs including “Peace” from their new album and deliver the traditional performance of “Imagine” moments before midnight. O.A.R. will be joined on the webcast by alt-rock group American Authors performing two of their hit songs “Believer” and “Best Day of My Life.” Univision will present musical performances by Alejandra Guzman and Jencarlos Canela; and the USO Show Troupe will perform a Military Salute medley to honor our Armed Forces.

National television and radio personality Allison Hagendorf (Host on The CW, VH1, Fuse TV, SiriusXM) returns to host the live, commercial-free webcast for the third year. She will be joined by Maggie Rulli, Andrea Boehlke andJeremy Hassell, who return from the 2013 New Year’s Eve webcast. Rulli and Hagendorf will kick-off the six-hour celebration at 6 p.m. EST and welcome the nearly one million revelers attending the celebration in Times Square as well as introduce the star of the show, the Times Square Ball. At the top of each hour, Hagendorf will be joined by a television network host or other celebrity who will talk about his or her New Year’s Eve experience and Confetti Wish for the New Year and then lead the revelers in an hourly countdown. Throughout the night, Hagendorf will keep the revelers informed about the musical performances and other exciting entertainment in Times Square. Rulli will provide exclusive interviews and backstage access while Boehlke and Hassell will get the fun personal stories from the revelers arriving from around the world to celebrate New Year’s Eve in Times Square.

Whether celebrating at home or out on the town, the worldwide online audience will be able to watch and participate in the global celebration with other viewers around the world. The custom-designed embeddable video provides viewers with a full Times Square New Year’s Eve experience.  This LIVE webcast video experience is available for digital media outlets, bloggers, social media editors, webmasters, and Facebook users to embed as a source of fun and entertaining content on their own sites customized for their communities and networks.

WHERE TO SEE THE SHOW & GET THE LIVE VIDEO FEED

The Times Square 2015 Webcast will begin at 6 p.m. EST on December 31, 2014 and end at 12:15 a.m. onJanuary 1, 2015 EST. The show will be streamed live on multiple websites, including TimesSquareNYC.org,NewYearsEve.nyc, Ustream.tv/2015 and TimesSquareBall.net.

Additional webcast information, including sizes and embedding codes, is available at:timessquarenyc.org/events/new-years-eve/webcast/index.aspx or Ustream.tv/2015.

The Times Square New Year’s Eve show is presented through four thematic storylines that develop throughout the night as explained below:

ONE WORLD REVEALED – The story behind the million revelers who make the pilgrimage to Times Square to be part of the global celebration at the Crossroads of the World. Webcast correspondents seek out revelers from across the globe to discover their personal stories and share their energy and excitement about ringing in the New Year in Times Square.

THE STORY BEHIND THE SHOW – This narrative highlights the production efforts behind New York City’slargest annual celebration through time-lapse videos, voice-over narrations, animations and interviews with event producers and directors of key departments. The worldwide audience will discover not only the tremendous amount of work and state-of the-art technology, but also the extraordinary personalities involved in the Times Square New Year’s Eve celebration. Revelers will be encouraged to ask questions about everything from cabling to confetti, staging to pyrotechnics, video production to the Ball Drop.

TIMES SQUARE – The story behind Times Square and its world famous New Year’s Eve celebration. The party started here in 1904 with over 200,000 revelers celebrating the New Year. Today, Times Square is famous not only for New Year’s Eve but also for the bright lights of Broadway, the streetscape of spectacular signs, innovative pedestrian plazas, and huge public gatherings throughout its history.

CELEBRATION, REFLECTION AND RENEWAL AND RESILIENCE – The story of the international online audience embracing the underlying themes of New Year’s Eve: celebration – celebrating people we love and the good things in life; reflection – looking back over the past year and taking stock of all that we have accomplished and all that we have endured; and renewal – embracing the chance to start fresh, try harder and do better; and resilience – with our 2015 charitable partner, The International Rescue Committee, we celebrate the strength of refugees and displaced people across the globe as they look to the New Year with hope.