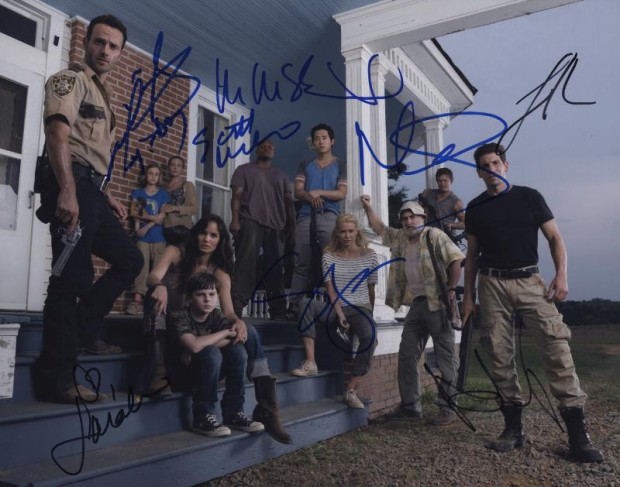 Cast members of “The Walking Dead” cable television show and baseball centerfielder Mike Trout are among the current and yesteryear celebrities and sports stars, such as Elvis Presley, The Beatles and Babe Ruth, whose autographs are frequently forged, according to the latest “Most Dangerous Autographs” list compiled by PSA/DNA Authentication Services.

** THE SHOWBIZ LIVE! – NEWPORT BEACH, Calif., Jan. 6, 2015  — Buying the purported autograph of a “Walking Dead” star from a stranger could be more dangerous than trying to fight off a hungry zombie.

There’s probably less than a 50-50 chance autographs offered in the marketplace of many current and former entertainment celebrities and sports stars are genuine, according to the latest annual report by PSA/DNA Authentication Services (www.PSADNA.com) of Newport Beach, California, the world’s largest third-party autograph and memorabilia authentication service.

PSA/DNA’s just-issued list of “Most Dangerous Autographs of 2014”  (http://www.psacard.com/MostDangerousAutographs) includes for the first time a warning about fake signatures of cast members from the popular cable television series, “The Walking Dead,” and young baseball superstar Mike Trout. Their autographs now join the listing with other familiar names, such as Elvis Presley, The Beatles and Babe Ruth, who have appeared on previous PSA/DNA buyer-beware consumer advisories because of widespread forgeries.

“One of the interesting aspects to ‘The Walking Dead’ show is that you never know who will meet their fate week to week, which makes it even more interesting for autograph collectors.  Actors such as Andrew Lincoln (Rick),Danai Gurira (Michonne) and Norman Reedus (Daryl) are among the regulars.  Most of the cast has a reputation for being accommodating signers for fans and that fan base has been growing in size with each passing season,” said Joe Orlando, President of PSA/DNA, a division of Collectors Universe, Inc.

Genuine, individual autographs of the cast members recently have been selling in the range of $50 to $250 each, and cast-signed “Walking Dead” photos can sell for $500 or more, according to Orlando.

“There are a lot of so-called ‘deals’ for autographs that can be found online, at local flea markets and even at some collectibles conventions, but most of those ‘deals’ are simply too good to be true. Genuine autographs do not often sell for a huge discount,” warns Orlando.

“Whether it’s the signature of a famous sports hero, an entertainment star or an important historical figure, it’s important that consumers buy from reputable sellers who use credible, expert third-party authentication.”

In 2014 PSA/DNA experts evaluated over 400,000 autographs submitted by collectors and dealers worldwide.

“Unfortunately, just as in past years, a large portion of them were forgeries.  In fact, it’s not uncommon for us to reject 50 percent or more of the signatures submitted to our company, especially when it comes to the more prominent names,” explained PSA/DNA Principal Authenticator Steve Grad who is one of the featured experts on the popular television series, “Pawn Stars.”

According to PSA/DNA, the ten “most dangerous” autographs of entertainment and historical figures the past year are:

According to PSA/DNA, the ten “most dangerous” sports stars’ autographs in 2014 are:

“PSA/DNA does not often receive obvious forgeries for evaluation.  So, if our rejection rate for a particular autograph approaches 50 percent, then you can only imagine how high the percentage of forgeries actually might be in the overall marketplace,” cautioned Orlando.

The complete PSA/DNA report on the Ten Most Dangerous Autographs of 2014, including interesting information about some current marketplace prices for genuine autographs, is available free online atwww.psacard.com/MostDangerousAutographs.

The public can see and compare hundreds of genuine sports, historical and entertainment autographs free online at www.PSAautographFacts.com, including examples of how a person’s signature may change over the years.

“With the proper precautions and education, collectors can participate in a safe hobby environment and avoid becoming prey for unscrupulous sellers,” said Orlando.

Since 1991, PSA experts have examined and certified more than 20 million trading cards, autographs and other entertainment and sports memorabilia with an estimated cumulative value of more than $1 billion.