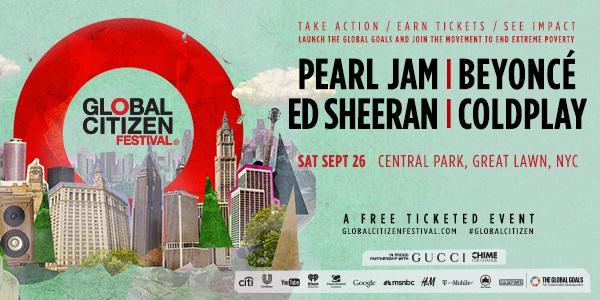 ** THE SHOWBIZ LIVE! ~ NEW YORK, Aug. 13, 2015  — Global Citizen has announced that Stephen Colbert, CHIME FOR CHANGE co-founder Salma Hayek Pinault, Deborra-Lee and Hugh Jackman, Kerry Washington and Olivia Wilde will appear as the lead hosts of the 2015 Global Citizen Festival, presented by Gucci and CHIME FOR CHANGE. The free-ticketed concert, headlined by Pearl Jam, Beyonce, Ed Sheeran and Coldplay, will take place on the Great Lawn of New York’s Central Park on September 26, 2015.

As the lead hosts of the Festival, Stephen Colbert, Salma Hayek Pinault, Deborra-Lee and Hugh Jackman, Kerry Washington and Olivia Wilde will encourage fans and friends to get involved with the Global Citizen movement and help end extreme poverty by 2030. Each host is committed to encouraging actions on GlobalCitizen.org, where fans can participate in the latest Action Journey and enter the draw to win a pair of tickets to the Festival.

Since the headliner announcement of the 2015 Global Citizen Festival in early July, nearly half a million actions have been taken on behalf of the world’s poor. Today’s official host announcement coincides with the nextAction Journey release, where global citizens will champion the importance of improving universal access to education, especially for girls and women. Global citizens will be asked to send a voice message to Prime Minister Erna Solberg of Norway, encouraging her to attend the 2015 Global Citizen Festival and make a commitment to universal education. Hugh Evans, CEO of The Global Poverty Project, will be meeting with the Prime Minister next week where he will personally deliver these messages.

MSNBC returns as a media partner of the Global Citizen Festival for the second year. Willie Geist, Janet Mock,Thomas Roberts and Alex Wagner will host the simulcast of the full concert from 4-10 p.m. ET on MSNBC and MSNBC.com live from Central Park. The YouTube livestream will be hosted by AsapSCIENCE and Matthew Santoro on youtube.com/globalcitizen, presented by T-Mobile. Tamron Hall will host NBC’s one-hour television special of the event, produced by director and screenwriter Richard Curtis, to air on Sunday, September 27. A one-hour special of the Festival will also air on BBC One in the UK on Monday, September 28 and will be distributed globally through BBC Worldwide. The Festival will be produced by Emmy Award-winning producer,Ken Ehrlich (Grammy Awards). An audio feed of the concert will also be simulcast live on the “Global Citizen Radio” digital station on iHeartRadio, iHeartMedia’s industry-leading digital radio service, making this the fourth year that iHeartMedia has partnered with Global Citizen in support of the Festival. Audio from the Festival will also be digitally streamed on innovative music and entertainment platform, Tidal.com. The Festival will be produced by Emmy Award-winning producer, Ken Ehrlich (Grammy Awards).

Said Stephen Colbert, “I am honored and thrilled to join Global Citizen in urging world leaders to commit to ending extreme poverty. Finally, all that U.N. traffic will have a purpose!”

“We can’t wait to stand with these awesome artists, co-hosts, and thousands of global citizens in Central Park this September as we call on our leaders to end the injustice that is extreme poverty,” said Deborra-Lee andHugh Jackman. “The Global Citizen movement is proof that when we come together and raise our voices, our leaders pay attention.”

Kerry Washington said, “I am very excited to be a part of the Global Citizen Festival and to join in this movement calling for an end to extreme poverty so that our future generations can live in a more just and equal world.”

“Over the last four years the Global Citizen Festival has achieved real and meaningful impact for those in need around the world. I’m excited to join everyone again this year to show what we can achieve when our energy is focused in the right place,” said Olivia Wilde.

“We are so grateful for the support of these world-class artists and activists,” said Hugh Evans, CEO, The Global Poverty Project. “Ending extreme poverty is a long-term commitment for global citizens around the world. With the help of these individuals to inspire and motivate our movement brings us a step closer to realizing the Global Goals.”

Said YouTube star Matt Santoro, “I’m incredibly excited to be hosting this year’s festival. The Global Citizen project is something I am very passionate about, and it is the perfect way to involve my audience in a movement that is making a difference worldwide!”

“We are honored to be a part of Global Citizen,” said AsapSCIENCE. “It is important that we embrace our global community and urge world leaders to fight poverty, embrace equality and create a more sustainable world for everyone. We can’t wait to be surrounded by people who share this common goal and have worked hard to create a positive change in the world!”

In July, Global Citizen announced a new partnership with Gucci and the CHIME FOR CHANGE campaign to build a community of people who want to learn about and take action on the biggest challenges faced by girls and women. CHIME FOR CHANGE was founded by Gucci in 2013 to raise funds and awareness for girls and women’s equality.  Led by co-founders Beyonce Knowles-Carter and Salma Hayek Pinault, the campaign has joined forces with Global Citizen to promote education, health and justice for girls and women around the world.

“As a global citizen and co-founder of CHIME FOR CHANGE, I am honored to co-host the 2015 Global Citizen Festival,” said Salma Hayek Pinault.  “Empowering girls and women is a key step toward ending extreme poverty, and I am proud to be a part of this historic moment where we will raise our voices together to create real change for girls and women around the world.”

In coordination with Global Citizen, CHIME FOR CHANGE and Salma Hayek Pinault are encouraging supporters to “CHIME for Education” through a recently launched Crowdrise campaign that supports girls’ and women’s education efforts around the world. By donating to CHIME for Education, fans will be entered to win two VIP tickets to this year’s Global Citizen Festival. To find out more information and support the campaign, visithttps://www.crowdrise.com/CHIME.

Citi has been a proud partner of the Global Citizen Festival since inception four years ago, and Citi credit cardmembers enjoy exclusive access to VIP offers and ticket pricing.

People everywhere are invited to sign-up, take actions, and enter the prize draws for free tickets. In total, 48,000 free tickets to the Festival will be given out to Global Citizens. Once fans complete an Action Journey onglobalcitizenfestival.com, they can enter to win free tickets. Ticket draws will occur throughout the summer and fans will be notified via Global Citizen when they have been selected.