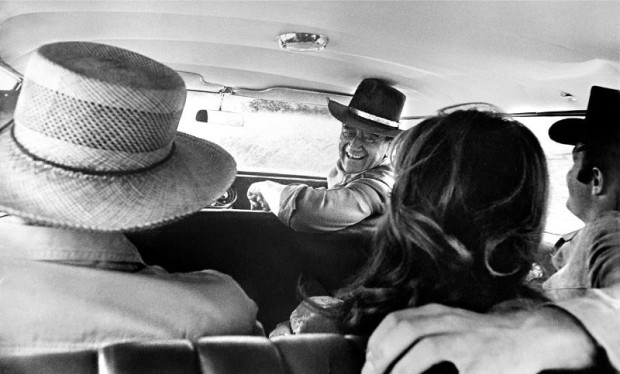 ** THE SHOWBIZ LIVE! – LOS ANGELES, Feb. 17, 2015 — A rare and never-before-seen photo collection of intimate moments with famous Hollywood stars has been uncovered by John Wayne’s son Ethan Wayne. The collection, by famed photojournalist John R. Hamilton, is an assortment of candid and raw images showcasing Hamilton’s private access to the greatest movie stars, musicians, and directors of all time.

The archive consists of thousands of negatives and slides on over 800 celebrity subjects including James Taylor,Johnny Cash, Marilyn Monroe, Richard Gere, Jayne Mansfield, and many more. Hamilton’s insider view reveals authentic and special off-screen moments: Steve McQueen playing Frisbee, a young Clint Eastwoodwashing his car and eating breakfast in bed, and a teenage Elizabeth Taylor as a cheerleader at an all-star baseball game.

For the first time ever, the photos are being released to the public for viewing through various exclusive exhibits around the country, giving the world an exceptional behind-the-scenes view into the life of these extraordinary stars. A selection of photos will be available for purchase through JohnHamiltonCollection.com, where a portion of the proceeds go to the John Wayne Cancer Foundation, an organization that funds novel and innovative programs that improve cancer patient outcomes and save lives including research, education, awareness and support.