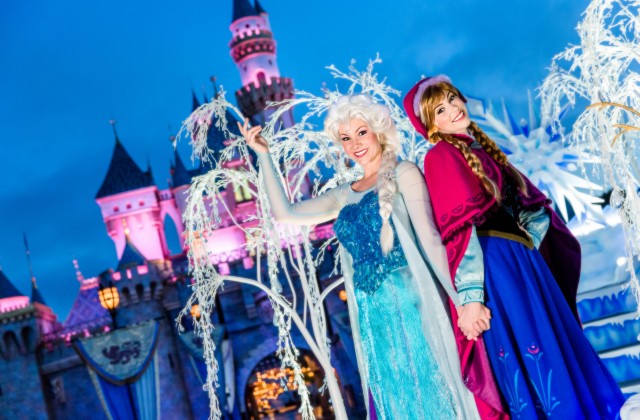 “Frozen” Sisters Join “A Christmas Fantasy” Parade for 2014 Holidays – Anna and Elsa, sisters from the Disney animated hit “Frozen,” will join the cast of “A Christmas Fantasy” parade this year for the annual holiday celebration at the Disneyland Resort, Nov. 13 through Jan. 6, 2015. The popular visitors from Arendelle will greet guests from a magical parade float of snow and ice, created by Queen Elsa. In this photo, Anna and Elsa appear as they have been seen in the “Frozen” pre-parade at Disneyland Park, prior to the Holidays. (Disneyland Resort)

Among the highlights of the season, Nov. 13 through Jan. 6, 2015, is the return of the breathtaking “World of Color – Winter Dreams” holiday spectacular – with new songs added from the “Frozen” soundtrack. Also returning to Disney California Adventure Park is the festive “Disney ¡Viva Navidad!” holiday celebration and the grand finale of the season, a five-day celebration of Three Kings Day. 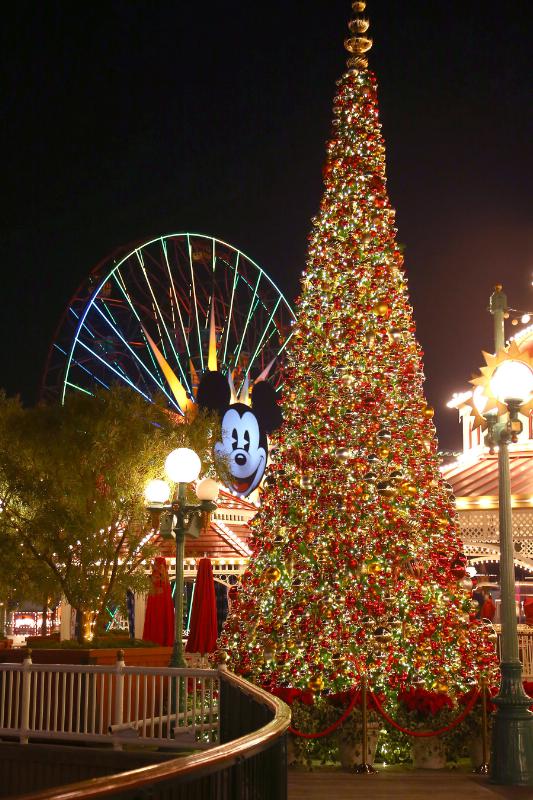 Disneyland Resort Holidays – (Nov. 13, 2014) When it comes to making magical memories, there’s no place like the Disneyland Resort during the Holidays. From Nov. 13, 2014 – Jan 6, 2015, the season shines more brightly than ever with “Disney Viva Navidad!” plus sparkling decor and Christmas trees at Paradise Pier and Buena Vista Street in Disney California Adventure Park. (Paul Hiffmeyer/Disneyland) (PRNewsFoto/Disneyland Resort)

Holiday time at Disneyland Resort has become an annual tradition for many guests, filled with an abundance of merriment, tradition and magical memories. This year Disney Parks invites guests to “Show Your Disney Side” as they explore all there is to see and do. Expanded hours at both Disneyland Resort theme parks extend the family fun time, while the Downtown Disney Winter Village offers a chance to play and skate at “Olaf’s Frozen Ice Rink.”

At Disneyland Park, holiday traditions include the popular “A Christmas Fantasy” parade, celebrating its 20th anniversary this year by welcoming Anna and Elsa from “Frozen” into the cast. They are among the 100-plus parade performers, including Mickey Mouse, Minnie Mouse, other Disney characters and Santa Claus, making a special appearance from the North Pole.

When Santa isn’t appearing in “A Christmas Fantasy,” he and Mrs. Claus are greeting guests and listening to holiday wishes at the Jingle Jangle Jamboree in Big Thunder Ranch in Disneyland. Jingle Jangle Jamboree comes to life with Disney characters, music, games, cookie decorating, crafts and seasonal entertainment. New this year on the Jamboree stage is a comedy and music show that invites guests to laugh and sing along in a wacky tale of Christmas in the West.

After its successful 2013 debut, “World of Color − Winter Dreams” returns to Disney California Adventure with several “Frozen” songs in the show, including “Do You Want to Build a Snowman?” and “Love is an Open Door.” Also returning to the nighttime spectacular is Olaf the snowman from “Frozen.” The holiday version of the popular “World of Color” show features classic winter scenes from such beloved Disney and Disney●Pixar films as “Bambi,” “Toy Story” and, of course, “Frozen.”

Downtown Disney District and Hotels of the Disneyland Resort

In the Downtown Disney District, guests may take a break from their holiday shopping and dining to go skating on “Olaf’s Frozen Ice Rink.” The rink opens for 60-minute skating sessions from 3 to 10 p.m. Sundays through Thursdays, and 3 to 11 p.m. Fridays and Saturdays. This year, the Downtown Disney Winter Village around Olaf’s Frozen Ice Rink is bigger than ever, offering shoppers holiday gift items such as “Frozen” plush toys, holiday crystal from Arribas Brothers, art works, clothing and accessories, all sold from the windows of the charming village houses. Hot chocolate from Ghirardelli along with coffee, sweets and baked goods from La Brea Bakery are also available at the Downtown Disney Winter Village.

The Hotels of the Disneyland Resort join in the holiday festivities with twinkling lights and ornaments, special entertainment and holiday dining with themed menus. The six-foot-high gingerbread house in the spacious lobby of Disney’s Grand Californian Hotel & Spa is large enough for hot chocolate to be sold from its window. Guests also will enjoy new and favorite menu items at Napa Rose in Disney’s Grand Californian Hotel & Spa, and at Steakhouse 55 in the Disneyland Hotel, which recently debuted a seasonal Chef’s Tasting Menu.

One of the many benefits of staying at one of the hotels of the Disneyland Resort is Extra Magic Hour,* an early admission option available to registered hotel guests every day of their  hotel stay. Extra Magic Hour offers admission prior to park opening to select attractions, stores, entertainment and dining locations in Disneyland Park (currently Tuesdays, Thursdays and Saturdays) and Disney California Adventure Park, including Cars Land (Mondays, Wednesdays, Fridays and Sundays). Extra Magic Hour is only available for guests who book and stay at a Disneyland Resort Hotel, and each registered hotel guest (ages 3 and older) must have a valid theme park ticket and active hotel room key card.*

Guests wishing to stay in one of the Disneyland Resort hotels will enjoy a special hotel offer** during the holiday season. When guests book through Nov. 19, they may save up to 20 percent on premium rooms Sunday through Thursday nights through Dec. 18, at Disney’s Grand Californian Hotel & Spa, Disneyland Hotel or Disney’s Paradise Pier Hotel.**  Weekend discounts are not available and discounts are not available Nov. 13 through 16, and Nov. 21 through Dec. 13. To book, call 714-520-6425 or visit www.disneyland.com/offers.

For more details about Holidays at the Disneyland Resort, visit www.disneyland.com/holidays.